Home > Books > Till The Dead Speak 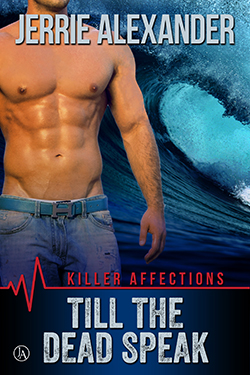 Till The Dead Speak

When an injury on the job sends FBI agent Linc Hawkins home to rehab, his plan to enjoy the Malibu surf and sand is interrupted when a cafe owner he befriends is murdered, and a promise to take care of the man’s granddaughter must be kept. Keeping the sexy blonde safe and out of his arms proves to be a dangerous challenge, both to their lives – and to their hearts.

Samantha Anderson receives the shock of a lifetime when a grandfather she didn’t know existed, dies and leaves her a fortune. The life-altering event sends her to a fairy tale beach in Southern California, and makes her question if her entire past was a sham. Sam uncovers family secrets with the aid of a smoking-hot FBI agent who’s hell-bent on keeping her safe. Sparks fly as they work side-by-side, and she finds herself falling in love.

The past and present collide as the pieces of this puzzle come together. Why was Samantha’s grandfather killed? Why was he estranged from his real family? It’s too bad the dead can’t speak, because Linc and Samantha will have to survive a killer bent on total destruction if they’re going to find their happily ever after.

Leo Cornetta straightened his five-foot-eight frame to its highest, pushed open the door to his boss’s outer office, and then walked inside. He almost ran over the boss’s crazy-ass son.

Dylan caught the door, held it open, and then walked into the hall. “Go on back. He’s expecting you.”

Leo glanced around, discovering that he was alone in the reception area. Fuck. The administrative assistant was never around when an employee was in serious trouble.

Leo licked his dry lips, sucked in his gut, and tapped on the door. Without waiting for a response, he entered. The boss seemed to be engrossed in paperwork, ignoring Leo’s presence. Finally he paused, placed his pen just so, straightened it, and then looked up. His expression, a perpetually superior, smug sneer, pissed Leo off, but he was smart enough not to let it show.

“By the look on your face, I’m guessing you haven’t sorted out this mess.”

“Not yet. I tried to search Charlie’s file cabinet, but there’s no reason for me to be in there for more than a minute. There would be questions if somebody saw me digging around.”

“You getting caught is not my problem. Finding those pictures is more important.”

“It was stupid of you to leave both sets of books where someone could find them and take pictures.”

“Nobody ever came into my office.” Leo struggled not to whine. “And I always worked on the books after the restaurant closed for the night.”

“You actually saw these pictures, correct?”

“Damn right I did. Charlie called me in early and waved a stack of them under my nose.”

“Then you should have killed him right then instead of giving the old bastard time to hide the evidence.”

“The restaurant was full of people. The only thing I could do was promise him that if he’d wait until after closing, I’d tell him the whole story.”

The boss waved Leo off. “Your reasons are not important now. Find those pictures.”

“That FBI agent is making noises over the coroner’s decision.”

“Then I suggest you clean up your mess quickly.” The boss sighed. The sound of disgust made Leo’s balls tighten. “It was your job to make sure no one learned what was going on and you failed. And you failed again when you didn’t make sure the evidence was in your possession before you killed him.”

“I…” Leo fumbled for a response.

“Stop.” Again, the boss held up his hand. “We’ll send a couple of guys to rip the old man’s house apart. If the pictures are there, they’ll find them. Dylan will see to it that the granddaughter gets a proper welcome after she arrives. If she’s smart, she’ll get the message and get on the next plane to Dallas.”

“Good. Do not let me down.” The boss picked up his pen and went back to work. “I will be unhappy if we lose this location.”

Leo had been warned and dismissed, but he wasn’t finished. “We’re going to hold off dropping off the money for a while, aren’t we?”

“The schedule hasn’t changed. It’s your job to ensure things go smoothly.” This time the boss leaned back in his chair, folding his arms across his chest.

“Will do.” Leo knew when not to argue. He made a quick exit, hurrying through the outer office and into the hall to find Dylan leaning against the wall.

“Yep. He’s all yours,” Leo said without breaking stride. “See you later.”

Out of the corner of his eye he saw Dylan’s foot swing forward. Leo tripped, failed to regain his balance, and landed face down on the hall carpet facedown. The toe of a shoe connected with his ribs, again and again. Pain ricocheted through his body, but he dared not yell or cry out.

Dylan bent over, lifted Leo’s head by his hair, and said, “Don’t fuck this up.”

Leo resisted the urge to speak. He knew to stay quiet. Only Dylan was nuts enough to attack someone where anybody could’ve seen him. Leo knew that if he let his temper get the best of him, he’d be dead before morning. Hot anger and humiliation boiled through him like lava as he slowly pushed himself to his feet and walked to the elevator.

This whole mess was Charlie’s fault. None of this would’ve happened if he’d stayed at home like most old and dying people. Instead, he’d unexpectedly returned to The Cage right after the money was delivered. Drowning Charlie had been a stroke of genius. His death had been ruled a suicide.

Leo stepped onto the elevator, turned, and smiled back at Dylan. As soon as he got his hands on those pictures, the nut job would join Charlie Pearson in death.

Samantha Anderson stepped out of the Los Angeles airport car rental office, dragging her suitcase behind her. Before scanning the rows of rental cars, she paused to slip on her sunglasses to lessen the glare of the bright California sunshine. The early March sun warmed her after the chilly ride on the plane from Dallas.

Under different circumstances she might have stopped to admire the unfamiliar landscape – towering palm trees, brilliant flowers and flowering shrubs, but she hadn’t come to enjoy the scenery. This was a get-in-and-get-out quick trip. With any luck, she’d be back home in Dallas within a couple of days.

Suddenly, a strong arm wrapped around her waist from behind and jerked her backward, seconds before a black SUV brushed past them so close she felt the breeze on her face. Her heart slammed into her chest, escalating her heart rate from normal to supersonic. Her feet tangled with the stranger’s, and they both tumbled to the pavement, Samantha landing on top of a rock hard chest.

“Oh my God!” Her words whooshed from her lungs. She struggled to extricate herself from the stranger’s grip.

“Hang on.” The man rolled her off his chest, stood, and then pulled her to her feet in one motion.

“That was close.” She took two steps back, trying to catch her breath.

“I’m sorry I startled you, but there wasn’t time to introduce myself.”

“It’s not a problem. Thank you for — wow, I think you just saved my life.” Samantha looked up into Texas-sky-blue-eyes. And his voice, deep and rich as warm caramel, didn’t do a thing to slow the rapid kathump-kathump-kathump of her heart.

“Welcome to California.” He smiled, and the stern expression vanished. “Are you hurt?”

“Other than shattered nerves, I don’t think so. Are you okay? You took the brunt of the fall.”

“That was nothing. You’re Samantha Anderson?”

“That’s right.” Her knees wobbled slightly as fear circled from her brain to her chest, much like water down the drain. “How do you know my name?” Everything about this trip had her spooked, and this guy wasn’t helping matters.

“Easy. I’ve got you.” He caught her by the elbow. “Lincoln Hawkins, but most people call me Linc.” He extended his free hand. “Charles Pearson, your grandfather, was my friend.”

“That statement isn’t exactly endearing.” She hesitated, but then shook his hand. “That Charles Pearson is my grandfather is something I still haven’t wrapped my mind around.”

“It must’ve been one hell of a shock.” He nodded his head as if he understood her situation, which he couldn’t possibly.

“That’s an understatement.” A chill rushed up her arms. “Why are you here? How did you know who I was?”

“I’ve seen pictures of you. Look, we can get into all that later. Right now, we need to talk about your safety.”

“I’ll be more careful. Okay?” She pulled her hand from his warm grasp. “I don’t usually walk out in front of moving vehicles.”

Other Books in "Killer Affections"

Till Justice Is Served
Look Inside
Disclosure of Material Connection: Some of the links in the page above are "affiliate links." This means if you click on the link and purchase the item, I will receive an affiliate commission. I am disclosing this in accordance with the Federal Trade Commission's 16 CFR, Part 255: "Guides Concerning the Use of Endorsements and Testimonials in Advertising."